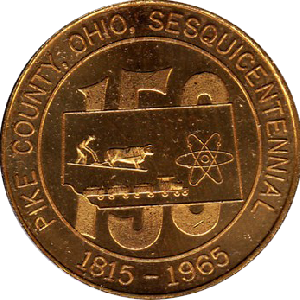 Amazing to think of this!

I miss the Emmitt House

Prior to placing the current Pike County Fair in Piketon, there were other fairs in the county. The Village of Beaver hosted a fair for a number of years. The 1906 fair was the last held in Beaver. Several of its buildings were moved to Piketon where the fair was held in 1907. This cup is from the 1906 Beaver Fair whereas the advertisement is from the 1905 Beaver Fair. ... See MoreSee Less

Germany Community Church was located along present day Germany Road in Union Township. Germany was a small community of German families in the center of the township. It also had a store and post office. ... See MoreSee Less

Here's an advertisement from the Davis - Hammerstein Company in Beaver dating to 1951. Omer Davis and Lamar Hammerstein were longtime partners in the furniture and undertaking business. ... See MoreSee Less

We bought our first living room set there. They were so understanding about young marrieds with tight money. He said you just take it and enjoy it. Pay us interest free until you pay it off. Such a nice man- Mr Hammerstein